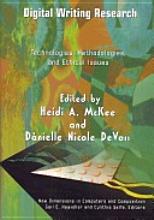 McKee and DeVoss‘s edited collection, Digital Writing Research: Technologies, Methodologies, and Ethical Issues, provides an array of technological tools and methodologies which may be used to study writing. The section we looked at last week, Part Three: Researching the Activity of Writing, covered time-use diaries, mobile technologies, and video screen capture. Some of the chapter authors, such as William Hart-Davidson, focus on the practical use of a technology: time use diaries to examine the integration of certain writing devices, like texting, into daily practices, via when and for how long a device is used. Other authors, such as Joanne Addison, focused on theoretical basis for using technology: mobile technologies as a way to investigate phenomenological experience.

This week’s section, Part Four: Researching Digital Texts and Multimodal Spaces, was highly related to our other readings by McKee and Porter this week. All the sources dealt with the differences between static and authors and published texts, vs. fluid online texts, spaces, and speakers.

Stuart Blyth points out the difficulty of coding online data, because it is not static, but fluid, with particular texts often changing over time. His suggestion is to collect copies of the web page at a particular point in time, and make notes using an HTML tag. His was the most detailed account of coding methods I have read thus far—providing protocol for tagging words, rhetorical moves, images, and even spaces and time-laps editing.

What I found interesting was the fact that, when this book was written, authors were still trying to find ways to freeze texts, rather than develop tools to track their development. Blyth does a good job of borrowing from film coding practices, in order to find ways to code online videos or animations, and comic practices for narrative, in order to enable time-laps analysis. However, this is not quite the same as looking at verbal/alphabetic texts changing over time.

Attending CEA this month, in St. Petersburg Florida, I met Chris Friend from the Texts and Technology program at UCF. He did a presentation about the application, Google Wave—which is slowly being phased out in favor of Google Docs. The premiere feature of this composition tool, however, which Christ drew attention to, was its ability to record the collaborative writing process performed on/in a document. It worked in real time, and at any point you could “rewind” so to speak and watch how different writers had edited and added to the document. There was also a chat feature which allowed people to talk about their changes as they worked. This feature was also time stamped to be replayed with the document recording.

Digital Writing Research was published in 2007, however many of the chapters would lead you to believe otherwise. Out of the two sections we  read, Google is only named once—in one paragraph. I think that Chris’s work is a great example of where composition methods of research might be going in the next few years.

McKee and Porter’s CCC article, “The Ethics of Digital Research: A Rhetorical Approach” was incredibly enjoyable read. Published in 2008, the article addresses the need for IRB and ethical guidelines, to be tailored for online environments. At the moment, IRB’s qualifications for review are based on 3 things—two of which the article deals with 1) whether the study looks at humans or texts, 3) whether the human data is public or private, 3) and whether the data is “individually identifiable” (“the identity of the subject is or may be readily ascertained by the investigator”).

To simplify: human subjects research needs review if it is: of people, private, and identified. It does not need review (is not human subjects research) if it is: of texts, public, and/or unidentifiable. McKee and Porter problematize all three of these binaries using real examples of ethical dilemmas in online research. They provide suggestions for how researchers may make ethical choices in their studies; in particular, they propose the deliberative process of casuistry, with special attention to the rhetorical situation of various web texts (purpose, audience, environment, expectations).

This work is supplemented in “The Ethics of Conducting Writing Research on the Internet: How Heuristics Help,” in which McKee and Porter provide a more detailed set of diagrams, which take the many fluid factors of online writing into account: degree of interaction, data ID, topic sensitivity, subject vulnerability, etc.

My favorite thing in this article was the below diagram, tracing the continuum between “Space” and “Place.” Something I inferred from this distinction was the difference between static, (two dimensional) texts, versus fluid (four dimensional?) digital texts. One can be tagged and coded easily, while the other requires something as complex as Google Wave/Docs.

In their CCC article, McKee and Porter discuss the difference between an author/person binary, versus a continuum. They quote Amy Buckman who says that “Most work on the Internet is semi-published” (qtd on 734).  McKee and Porter set this concept up against the idea of online texts as published documents which may be quoted and cited at will, within reason of fair use, without permission of the author. “In this respect” the authors continue, “the ethical guidelines governing fair use of others’ writing always apply, and the ethical guidelines of securing informed consent may also apply” (734).

The basis for their argument is very similar to one of Bruno Latour’s in We Have Never Been Modern, where he argues that there are no such things as concrete subjects or objects (people/texts), or essence and representation. Rather, he says that there are quasi-subjects and quasi-objects (like, semi-published), all of which have a subject or object identity, depending on what they are are in relationship to. In the case of online texts, McKee and Porter ask that we consider online texts relation to their writers, the writer’s intended audience, and their relationship to the researcher. Is the researcher part of that original, intended audience? Or would the author be disturbed to discover that their work was being analyzed and published by the researcher? That, ultimately, is the question, regarding informed consent.

One of the most interesting points to me was the data showing that faculty favor personal and in-class writing tasks, but they don’t  value workplace genres. While I understand not teaching something you aren’t yourself familiar with, and the need for personal reflection, I can’t help feel that college writing should include some preparation for disciplinary writing. This is why I favor the Writing About Writing approach (Downs and Wardle) –also discussed at CEA–because it teaches students about how writing works within particular discourses and ecologies, without setting out to teach in the disciplines themselves.

Our readings this week were all very interesting, and mostly related to online composition and studies of its complexities.

Dana Boyd’s dissertation was a fun read; I now understand why she is such a popular author, especially as a blogger. Her writing style and voice are incredibly personable as well as intelligent. I hope I can develop a similar communication style. In Taken Out of Context: American Teen Sociality in Networked Publics, Danah did an ethnographic study of teen’s cultural and social practices with new media networks during the rise and fall of MySpace (c. 2004-2006).

Her methods were truly impressive:  she scoured hundreds of thousands of profiles on sites as various as LiveJournal, Xanga, MySpace, and Facebook, while also observing chatrooms, immersive online environments, and other sites of teen interaction. in addition to her online investigation, she traveled to ten different states to formally interview 94 teens in their home towns. Wherever possible, she used random sampling, and her involvement with technology companies gave her access to data not usually available to users. Her triangulation included her subjects–teens themselves–as she interacted with them about her research over the 2.5 years of her study. It also included adults within the communities where the teens she interviewed were located. No doubt that her intern, Sam Jackson, and other new media scholars also helped to shape her analysis and interpretations of these communities.

Her theoretical foundation is interesting to me, because without ever mentioning ANT she describes the importance of investigating networks of practice without privileging either online or offline environments, people, objects, or sites–but rather moving along all these axises equally (50-55). She bases this approach on the writing of Jenna Burrell, whom I will have to read. Like Mol and other Praxiographers, she also rejects the divide between subject/object as essence and representation, saying that the wired and offline lives of students are not equivalent to a show and a backstage reality, but are rather intertwined in their communal practices.

I couldn’t help but laugh at the irony, as I read Leon and Pigg’s article about “Graduate Students Professionalizing in Digital Time/Space.” In it they point out the way students are using their computers as tools to multi-task in research and professional networking–this, as I click back and forth between three PDF readings, my University email, Danah Boyd’s blog, and this WordPress draft. Do I, as Leon and Pigg found in other graduate students, feel guilty for my hours of virtual exploration? Well, I did, especially when I first experienced sitting down to do one task and three hours later found that I had about 50, but not finished the first I set out to do–but I think that a couple years of experience have relieved me of that anxiety. I now know that it is indeed more productive, at times, to allow yourself t be led on. At other times, pressure will provoke you to stay focused, so that you can, for example, finish a blog post due for class in a few hours ^_^. For another interesting perspective on this topic, see Steven Johnson’s Where Good Ideas Come From Video, located in my “Animation Communication” blog post.

In “Your Views Showed True Ignorance: (Mis)Communication in an Interracial Online Discussion Forum,” Heidi McKee investigated a discussion which took place in blackboard regarding affirmative action and multiculturalism. Her methods included receiving permission from some of the students to quote their posts (82 out of 185), as well as personal interviews with the five major participants in the conversation. She asked the students how they would like to be represented in her article, explaining how she would describe herself: as a white middle-class woman who attended a predominantly white school. I think this was a great example of how ethnographers can share representational power with their subjects. I also felt that this was an interesting take on the “ethnography” as a genre–and felt that it did fall into a subcategory of the genre’s parameters. Perhaps the most excellent aspect of her paper is that it was hypothesis generating rather than hypothesis testing. She asked the students open ended questions, and her conclusions after the interviews were different than her hypothesis going into the study. She concludes that discursive writing practices can appear differently to different cultural and racial subjects, and what may appear tame to one group, may actually be very damaging to another.

In “Digital Hidden Transcripts: Exploring Student Resistance in Blogs,” Warren Mark explores a 15 year old student’s discursive resistance toward his teacher, exemplified in online writing. What may be unexpected about this study, is that Marc (the subject) is a student as the Fly High College, a school for boys in Singapore, where the author taught English for four years. I wish that there had been more discussion about the racial, linguistic, national, and economic implications of this interesting fact. Otherwise, Mark did an excellent job of incorporating the student’s own writing and voices into his work.